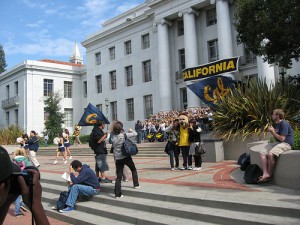 Berkeley's course for expat spouses had 25 attendees from 20 countries

The University of Berkeley, California, took steps to support expat spouses by creating a class called “Creating a Fulfilling Life in America,” available to spouses of international scholars, postdocs, students and researchers.

The six-week course focuses on issues such as dealing with culture shock, making American friends and managing stress. Each class session concludes with an hour long catered lunch, giving the expats an opportunity to share their experiences and connect with their classmates. Roibín Ó hÉochaidh explored the program in detail for the Berkeley NewsCenter, interviewing both participants and administrators.

The class opened the door to a lot of options and resources and helps you understand how things work and how to get started in a new country. I’ve seen a change in myself and my outlook where I’m more positive and more outgoing […] It helped me realize that I’m not the only one in this situation — I’m not alone — and that’s most important. I started volunteering several weeks ago and I’m excited to be opening a new chapter in my life in a new place with people from many different countries.

The course was organized by Sam Castañeda, Program Director for Berkeley’s Visiting Scholars and Postdoc Affairs Program. He said demand for such a support system was fairly obvious:

Strange food, culture, language, visa issues, transport, health care, the list just goes on and on. And not having family and friends, not having a social support system, while your spouse is working 80 hours per week, it’s easy to see how anyone could struggle initially.

Ó hÉochaidh wrote that a 1998 University of Montana study concluded international scholars whose spouses did not adjust well to life abroad were less productive than their co-workers. Unhappy spouses are often cited as the causes of failed international assignments.

Though Berkeley is a university the lesson for all employers (particularly large multinationals) is clear enough: invest in supporting your employees’ spouses and you will likely end up with more successful, more productive workers–much fewer costly failures.