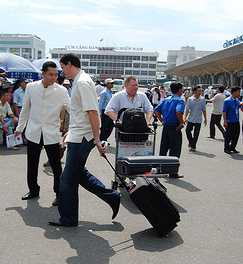 There are many reasons expats choose to return home. Often they are related to personal relationships.

Despite the rewards of expat life, a majority of expats return to their country of origin eventually. This certainly isn’t true of everyone, but definitely to the extent that an expatriate lifestyle is often a temporary affair. Looking at the reasons expats return home provides some insight into the challenges of building a new life abroad.

Assignments end. Many expats are abroad on international assignments, and have no intention of staying forever. In and of itself this isn’t awful–just a fact of life. But since expats tend to befriend one another (as opposed to locals), this means their social groups change frequently, adding to the emotional tumult of expat life.

To be with friends and family. Many expats find themselves many thousands of miles away from their closest friends and family members. This can leave them feeling quite alone at times, particularly given the ever-changing nature of expat communities. Some expats feel pressure to return to care for aging or ill family members. Others simply decide it’s time to “put down roots.”

Children. It’s no secret that kids change everything, and this is especially true of expats. Many prefer to educate their children in their country of origin, either for cost or quality reasons (tuition fees at international schools can be astronomical). Some expats also believe their current living situation is too difficult or dangerous for young children.

Relationship problems. Global relocation consultants often cite marital problems as a cause of failed expat assignments. This is especially common in situations where someone follows his partner abroad without having a job–leading to feelings of dependence or resentment. Boredom and inactivity–combined with culture shock–make it difficult to adapt to life abroad. Sometimes this leads to a major bout of depression. In an effort to prevent these problems, some multinationals run programs that find expat workers’ spouses jobs, too.

Looking at these common reasons for repatriation, it’s clear that making the most of life abroad requires not only a willingness to build new relationships, but also to work hard on maintaining existing ones.